In 2009, it was established that all different versions of the Turtles co-exist as parallel dimensions.  1987 cartoon, 2003 cartoon, the 80's comic book, the movies, the Japanese anime version (where Krang is a brain-like octopus), the Archie Comics take, the mid-90's Image Comics take where Splinter became a bat, THEY ALL CO-EXIST . . . as well as co-existing with the video-games.  They are all parallel dimensions of each other, across all mediums of storytelling. 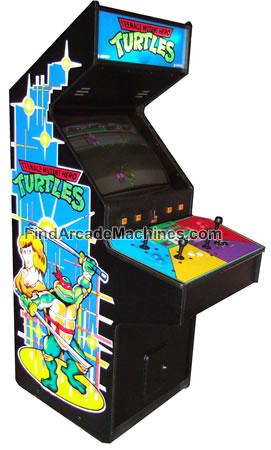 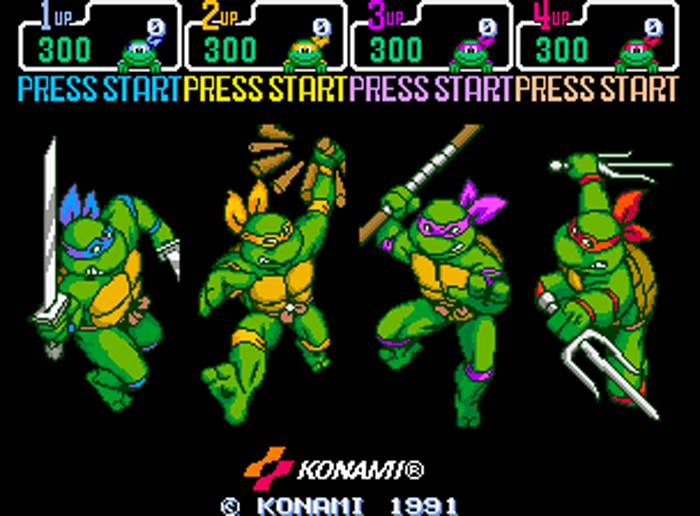 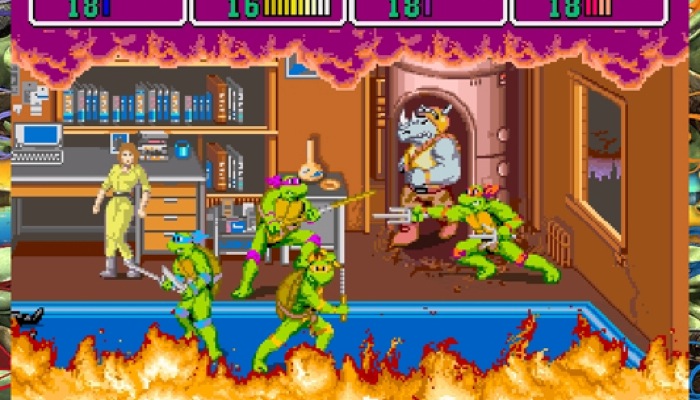 This is the TMNT arcade game, found at most Pizza Huts, and in its day, this game was THE BOMB.  By 1999 and after, people learned to bootleg arcade games with emulators and ROMs, but, back in the day, when people were in high school while I was a baby, that was probably THE PERFECT time to be alive.  That's the idea this video-game puts into my head.

There was TMNT the arcade game, and TMNT the Nintendo game, then TMNT2: the Arcade Game, based upon the arcade machine that had simply been called TMNT. 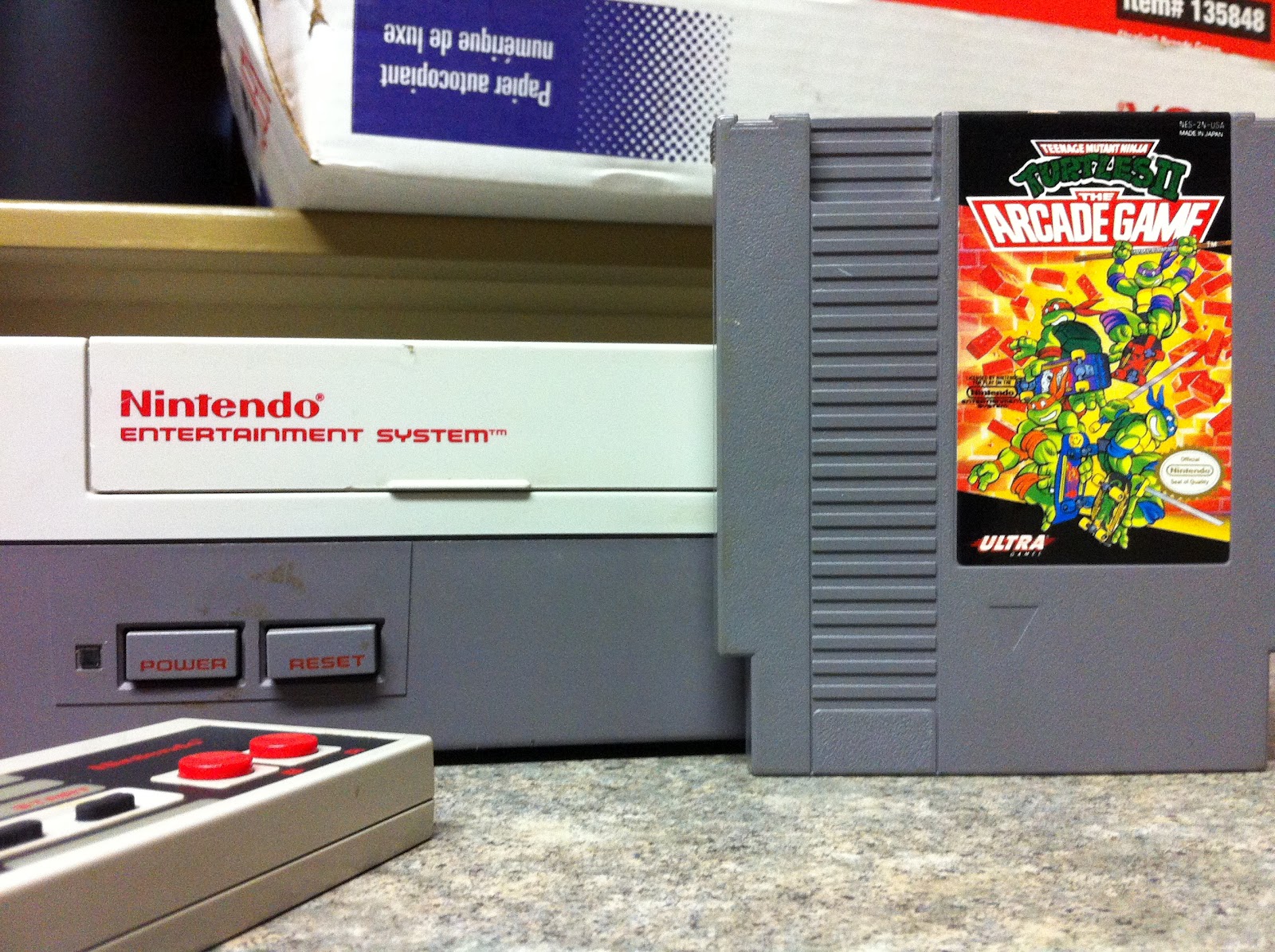 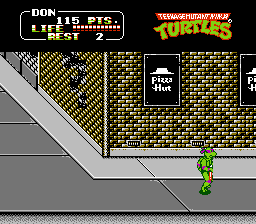 The Pizza Hut promo in the background was, on one hand, product placement (like the original plan of Root Beer Tapper to advertise Budweiser), and, on the other hand, it establishes the world shown in this game as a realistic, believable world, with city streets, intersections, buildings, and a Pizza Hut advertisement on a wall.  By noticing it in the background, it seems less shoved down your throat. 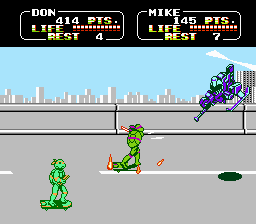 - 1990 movie, sticking mostly to the comics, and their serious tone, with a little influence from the 1987 cartoon, only with the Turtles' colored headbands and April O'Neill being a TV news reporter.  Then there was Movie 2, which geared it more toward the silly cartoon tone than the serious comic book tone, and Movie 3, which put them back in time to feudal era Japan.- video-games

And then came that whole Ninja Turtle Dry Spell for all those years, where people weren't really into it anymore, and you would NOT find any kids dressed as a Ninja Turtle on Halloween.  In 1997, people said to themselves: "!!!  This show is STILL ON the air??  It's STILL going on??!".  April O'Neill is no longer wearing yellow, for the days of the 80's are over forever, and she wears brown and blue, a more contemporary look.  REALLY makes you think about how the 80's and 90's were different from each other, and how life is so trippy, and you only get one life, and you're a baby at some point and then you grow older and that's IT . . . but yeah.  In 1997, the TMNT cartoon ended after 10 years.

- 2000 had Mirage Comics' "Volume 4", back to original creator Peter Laird, back to black-and-white, expanding the world of the Turtles 17 years after they were 15

- The "Tales of the TMNT" comics from Mirage, which shows you the missing time of Volume 3, so basically like Kevin Smith's "Chasing Dogma" comic, but for the Turtles

- 2012 CGI TV show seems to blend things and reach a new state in between the comics, the cartoon, and certain new twists, like April now being 16, new villains, and so on.

The thing is, as Mortal Kombat proved between 1998 and 2002, even a series that was once on top of the world may eventually slip away into obscurity unless action is taken to revitalize it.  Mortal Kombat had 4 weak years, followed by a highest point with MK: Deadly Alliance, a point higher than that with MK: Deception, and a still higher level with MK: Shaolin Monks.  But it takes a lot of work to bring a series' beat - its soul - back.  Ninja Turtles dropped out of worldwide mainstream popularity in either 1993 or 1994, it's kind of hard to say.  The Image Comics version went on, and the live-action show went on, and the Power Rangers even had a crossover where they MET the live-action Ninja Turtles, but, their days of being the stars seemed past.

So, with Volume 4, TMNT had returned to its comic book roots, with the original writer coming back.  I swear to the Lord: one time, in 2010, when I was 22 years old, one day I saw someone that looked identical to Peter Laird shopping at Target!  As a cashier, I asked him: "Aaaaaaaare YOU Peter Laird, the creator of the Teenage Mutant Ninja Turtles?"  He was just like "Uhhh, no, never heard of it!"  And I was like, "Really?  You've NEVER heard of it?"  . . . but then I decided to stop pushing it.  I had a feeling that he really was Peter Laird, creator of the TMNT, and that he just didn't want to be stuck talking for long to a freak like me.  But was it him, or not?  I guess I'll never know.

When I was 15, in 2003, I decided to try to write my own made-up superhero.  Power Knight: a man wearing a suit of knight's armor painted red and black.  Underneath, he is bald Michael Lanten, a man in his late 40's who has been robbing museums for years with his accomplice, Sarah Cypher.  Among the many things they have stolen from museums: an exhibit of two suits of knight's armor, allegedly belonging to two important warriors, with twin swords as well.

Michael Lanten learns that Sarah has been killing people, like museum security guards, horrifying him, because all he wanted to do was take paintings.  He objects to her crimes, especially after seeing a TV report on the damage she has done.  He attempts suicide with a sword, resulting in a gash across his chest, one perfect vertical line of red, a big permanent scar.  By the end of the story, Sarah tries to kill him with her sword, and almost succeeds, wounding him enough to give him a perfect horizontal line of red, completing a cross-shaped scar on his chest.

After his suicide attempt fails, he decides to go after Sarah himself, seeing to it that he get her arrested.  In order to look like less of a robber, he dresses in the knight's armor, looking like a knight, a good guy.  So the news reports that Boston has been having "a bunch of men in knight's armor" popping up lately.  Frustrated, he wants to demonstrate that he is one man, and he customizes his armor by painting it red and black.  Sarah paints her armor white and black to become Dominion.  Power Knight and Dominion are hero and villain.

Well, then it turns out that Moon Knight exists.  I bought a shitload of Moon Knight issues in 2004, at age 16.  So Power Knight is out, and Moon Knight is in.  He exists in a well-known comic book world, Marvel Comics, but is lesser known than DareDevil was before getting his own movie in 2003.  It seems like early 90's issues make more of an attempt to attach him to the rest of the Marvel universe.  Ultimate Marvel, which twists and turns around every character previously known, reboots Moon Knight as a man with multiple personality syndrome who does not know himself to be all these different people, rather than a man deliberately maintaining four identities, like in the 2006 Nicholas Cage movie "Lord of War".

I will soon start building this web-site up.

10 minutes before midnight, the start of January 31, 2014, I have decided to create a comic book blog about my ridiculously large collection of comic books.  Hey, why not.  Everything from Superman to the Silver Surfer to Dr. Strange to 60's Amazing Spider-Man to Moon Knight to Teenage Mutant Ninja Turtles to the Simpsons comics to many other things are within my gigantic collection.  Why not share it with the world?